Indigo > Blog > C-level executive salaries in the Ukrainian IT sector: the 2021 overview
< Come back

C-level executive salaries in the Ukrainian IT sector: the 2021 overview

CEO Ekaterina Osadchuk and the Indigo Tech Recruiters team gave the third annual overview of how much C level executives make in the IT sector. We share our results with you and express gratitude to Royallex represented by Vitalii Luzhentsov for assistance in the data processing. 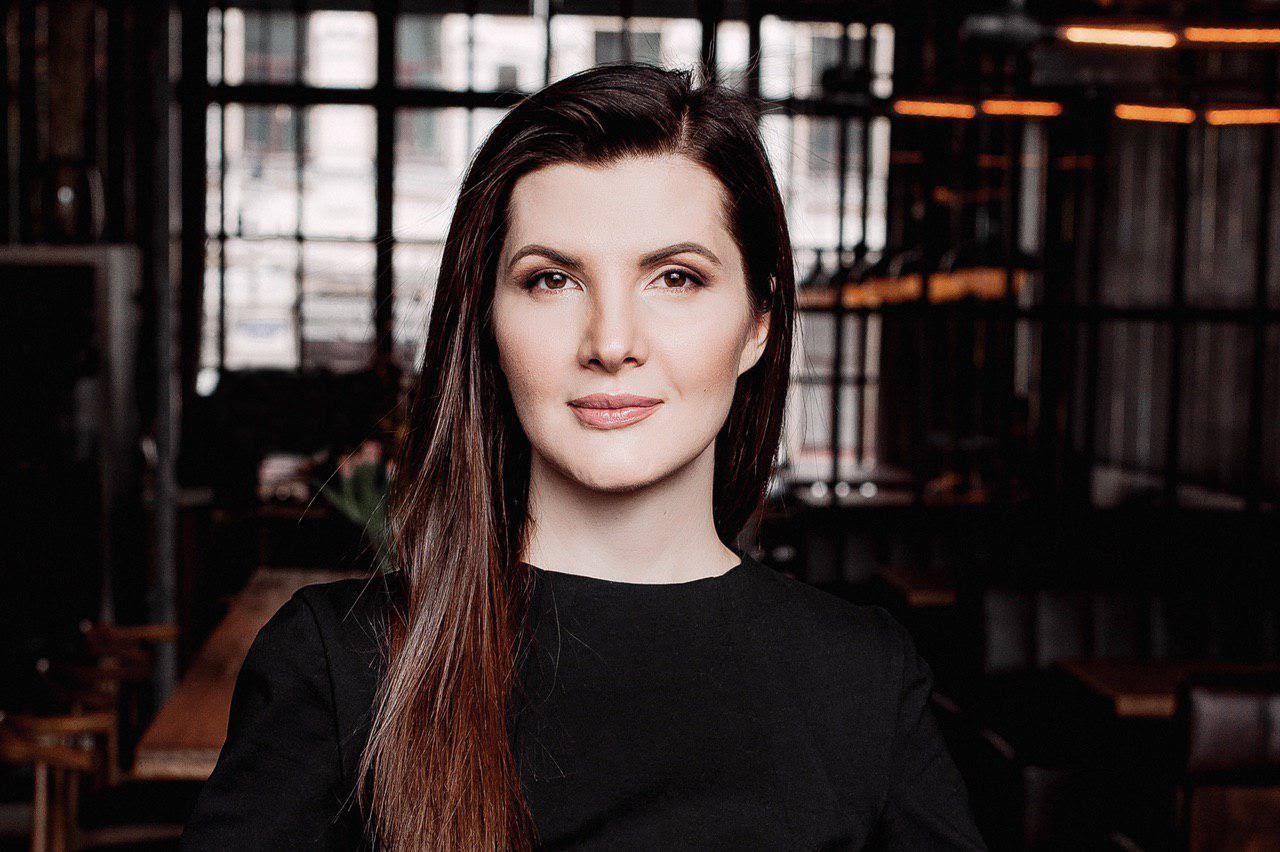 CEO Ekaterina Osadchuk and the Indigo Tech Recruiters team present the third annual overview of C-level executive salaries in the IT sector. We have already published an overview of salaries for all C-level positions. Now we are taking a closer look at specific positions from the research.

Before we begin, though, let's recap what makes a good CEO. In this MC.today story, you can discover what makes a bad one.

And here are the staples for a good CEO:

1. Unwavering preference for trust and transparency. The team accepts the rules of the game (objectives, tasks, roles, responsibility, financial incentives), and the owner gets a dashboard of their business and regular reports on the state of affairs and plans. One can easily approach a CEO like this with a problem, question, or suggestion without fear of being criticized.

2. Good analytic skills. A good CEO can break up a problem into components, keep priorities, and set tasks, deadlines, budgets, and people in charge.

3. Ownership. A good CEO knows unique aspects of the market, the company's competition, the clients' needs, upsides and downsides of the product/service, and how to sell it. Also, they own their mistakes and never hide behind excuses.

4. Clear goal setting and helicopter view. A good CEO shows what needs to be done but not how to do it. They know the team has more knowledge and experience and, therefore, strategizing is best done together so that the team can be trusted with carrying out the strategy without manual steering.

5. Reliance on figures and facts. A good CEO always has a business or financial model for the coming year with a clear understanding of the planned revenue, expenses, and profits based on the past statistics, market dynamics, and competition's experiences and pays due attention to the owner's needs and suggestions.

7. Clearly defining product and service mix. A good CEO focuses on the development and polishing quality instead of rushing around in search of short-term opportunities.

8. Keeping company cases and rules covered in presentations (involving the COO as needed). These also need to be kept up to date so that any new employee can find answers to their questions.

9. Always pushing for a good product/service. And seeing as early as at the development stage what value it can bring to clients and knowing when, how, and at which price it should be launched to fulfil the sales plan.

10. Structured line of thought in writing. A good CEO would support any critical events, e.g., the emergence of a powerful competitor or dismissal of a key employee, with figures, a plan, and deadlines instead of verbally complaining of problems or writing walls of text to justify why nothing could be done to avert it.

11. Ability to focus and make the right choice. Even if there is apparently no choice and everything is crumbling down. Even feeling the urge to escape, hide, or die.

If you have the privilege of working with a CEO that checks all these boxes, cherish them like the apple of your eye. And if you are such a CEO, kudos to you! You are an invaluable asset to your company.

Now, let's finally consider how the value of a good CEO translates into money.

We received 75 questionnaires filled by the founders working as CEOs for their companies, hired CEOs, Country Managers, and General Managers.

Salary ranges were largely similar, so we combined them to get a better fleshed out picture. 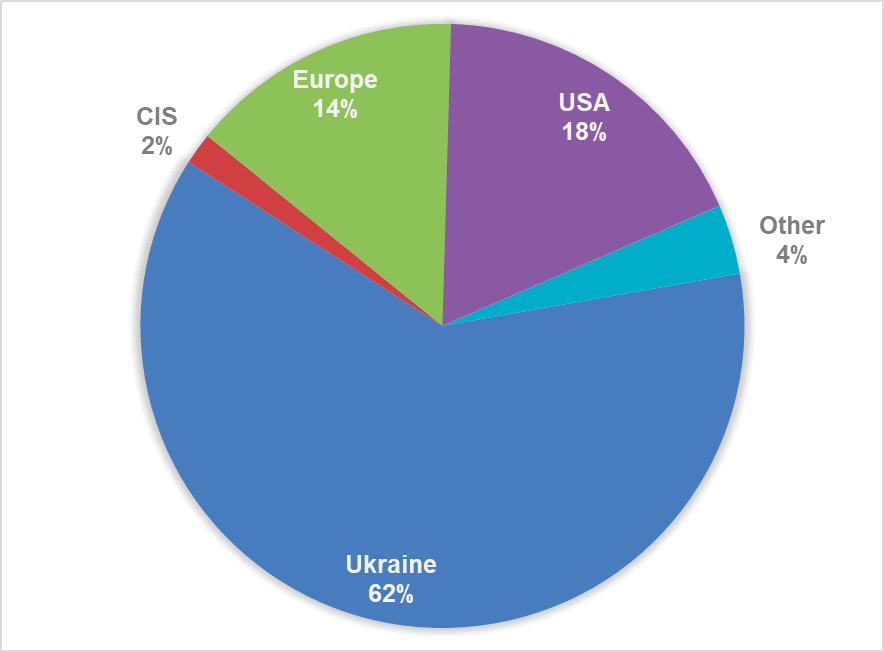 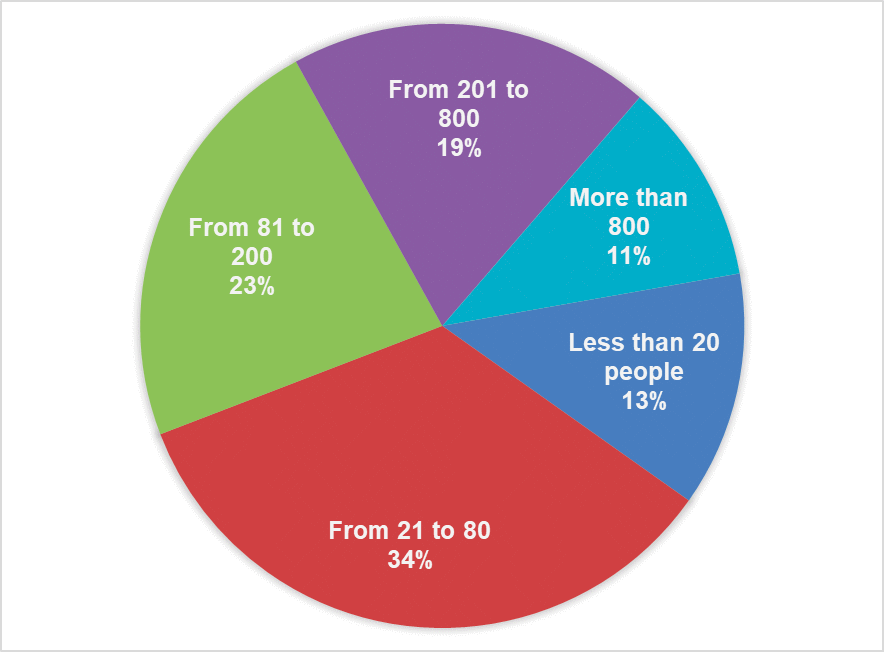 Most CEOs were from product companies (62%), and 28%—from the outsourcing ones. 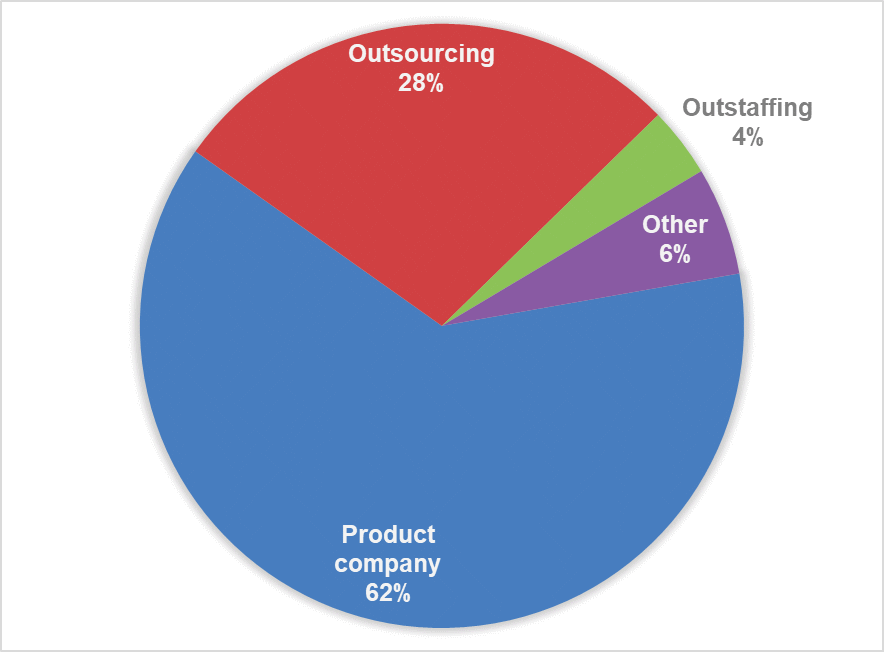 Hopefully, the results of our survey will facilitate your decision-making when it comes to sending or accepting CEO job offers.

Deciding on the salary, the candidate's experience, company size, the number of subordinates, and the like should be considered in addition to the market-average salary. This is what we'll demonstrate next.

Bear in mind, however, that the data on which we had fewer than 4 responses was excluded from the analysis since it didn't allow us to calculate a range that would be at least remotely objective.

E.g., only 4 CEOs answered that they worked in medtech companies, so we excluded their responses as insufficiently representative, leaving only the data with 5 or more responses.

The largest chunk of data came from fintech/banking and e-commerce. This is where we have the best-weighted salary range.

The largest salaries were seen in the mysterious Other category and the median level in Consulting.

CEOs in GameDev indicated the largest salaries on average across the range. Still, this data should be taken with a grain of salt since we have only 5 questionnaires from this industry.

Product and outsourcing companies have the same median salaries at $7000. However, starting from the 75th percentile, CEOs of product companies begin to get ahead.

Among the respondents, most tech CEOs were aged 30–39 years.

The data reveals that older age is a reason for optimism, at least when it comes to salary. CEOs aged 35+ had a median salary 60% higher than their 30- to 34-year-old counterparts.

Those aged 45+ had the highest salary on average. However, we have only 5 questionnaires from CEOs in this group.

The age of the company in which the CEO works matters, too. In the companies older than 10 years, median CEO salaries are higher, as well as overall levels, against younger companies. Specifically, the median level is at $8,250 and average—at $11,766.

CEOs of the companies working 1–3 years in the market earned a solid salary, too. It may be even higher than those working for the 3- to 5-year-old businesses have. Surprising as it may seem at first sight, it's nothing unusual. Younger companies often have no established payment system and often a) go with whatever level is asked since attracting the people into start-ups may prove to be problematic (stability issue); and b) rarely pay attention to the market levels—at the stage of rapid growth, speed is often valued more than cost-effectiveness. When it comes to company size, the correlation is similar (see Fig. 10).

The table below shows a sharp increase in CEO salary in the companies with an annual revenue upwards of $10 million—we are talking about double and triple the level offered by less profitable companies.

Only 12 female CEOs participated in the survey. They reported a median salary 40% lower than males.

The good news is that almost all CEOs were content with their work this year. The data shows that CEOs with a median salary of $7,000 were ‘Absolutely satisfied’ and those with the $8,000 one ‘Rather satisfied than not’. The motivation and demotivation factors are discussed later in this article. 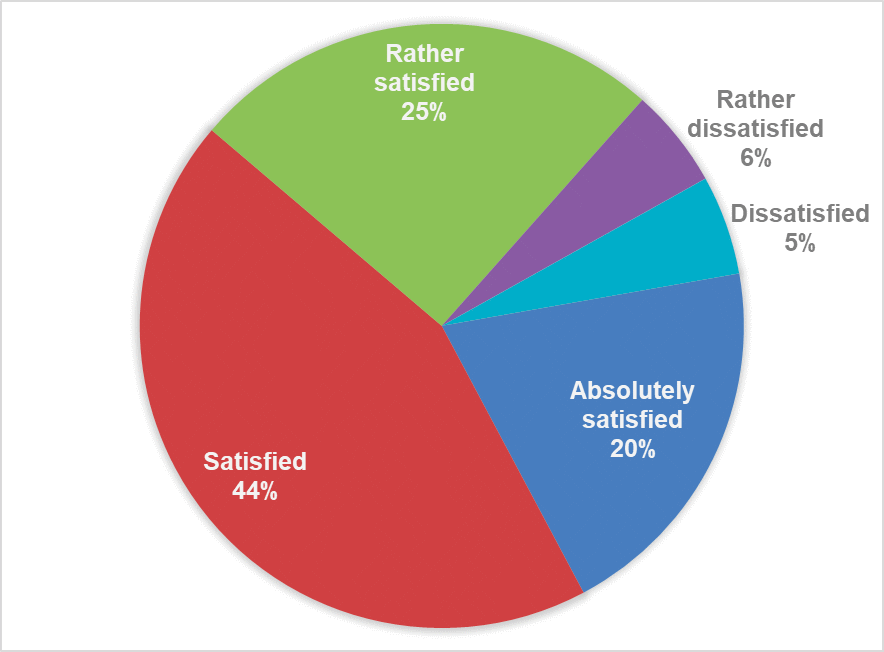 The salary was the third-most important motivation factor. The first was decision-making freedom (69%), followed by professional development (56%). 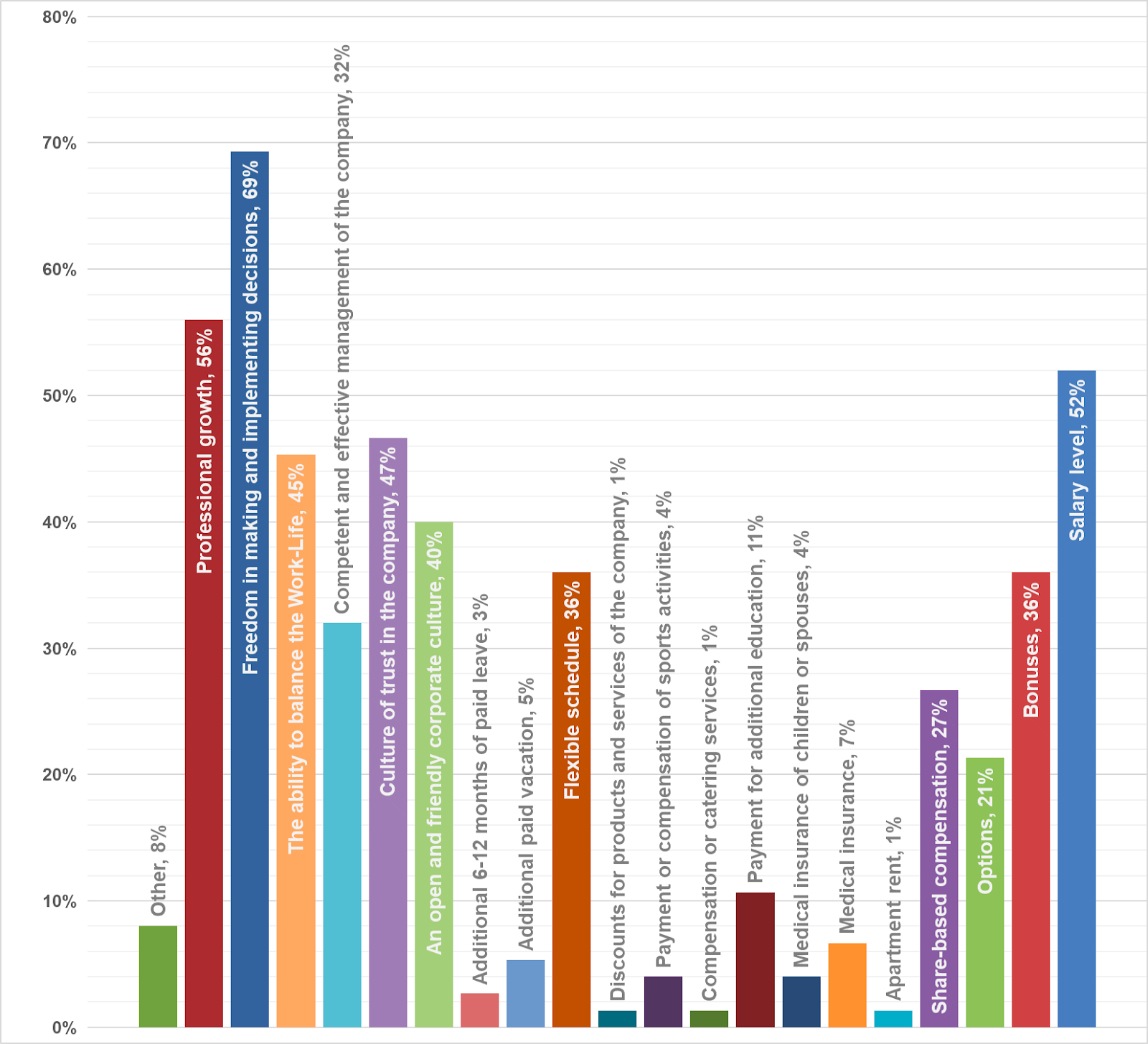 CEOs were demotivated primarily by lack of professional development and freedom of decision-making, poor work-life balance, and incompetent management. The salary was only the fifth-most important demotivation factor. 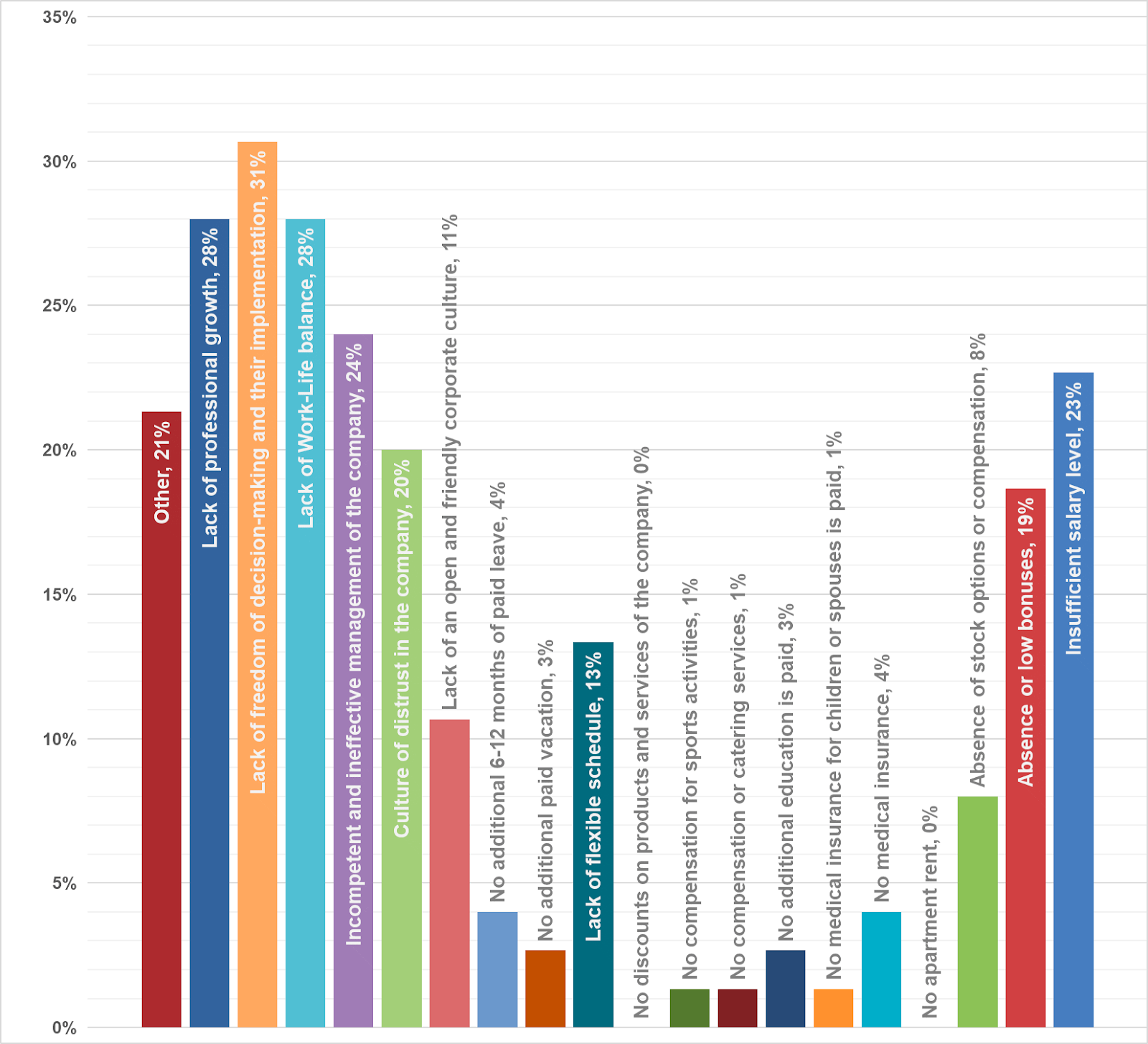 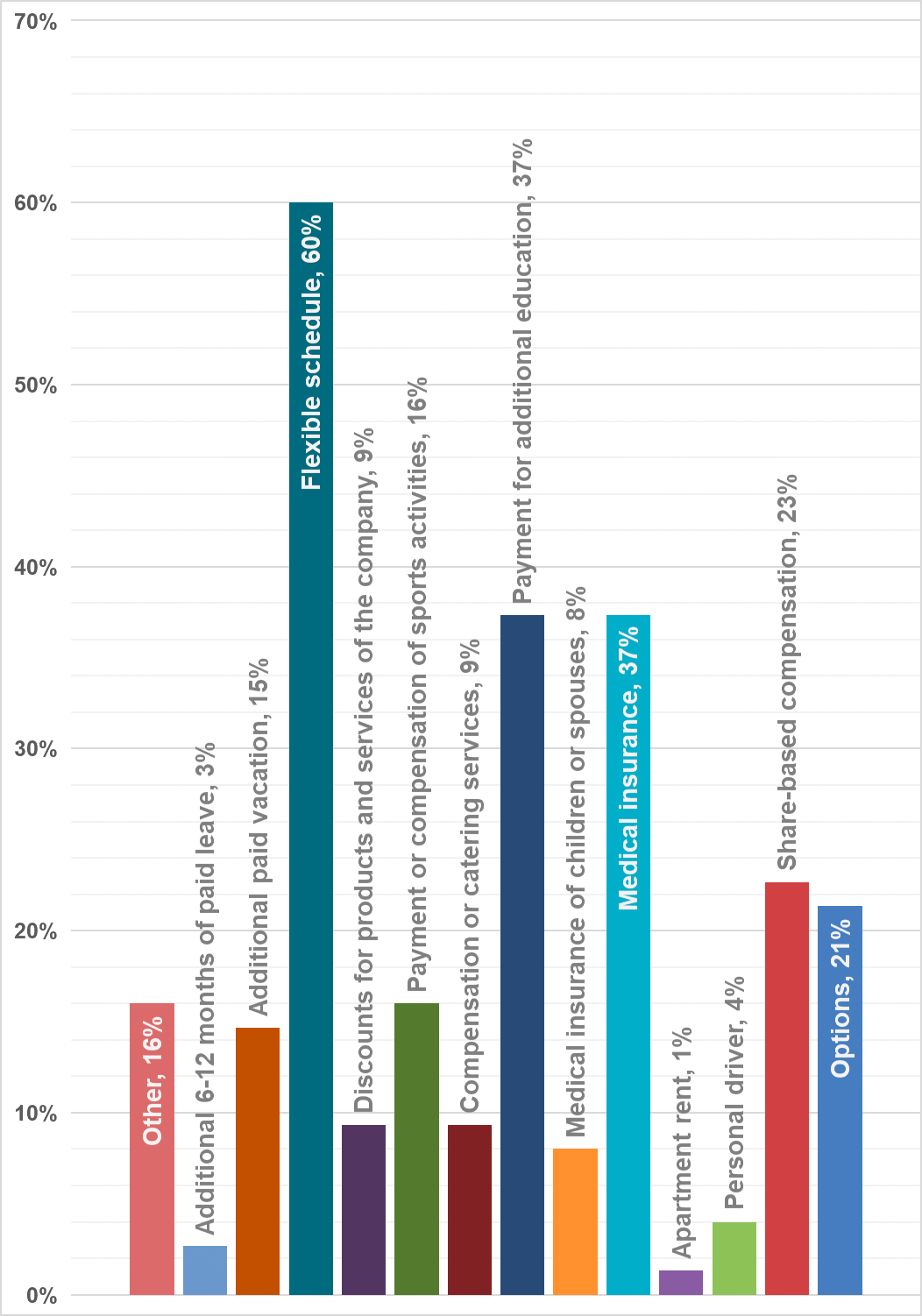 At the time of the previous survey, 49% of CEOs worked in the office, 42% combined office and remote work, and only 4.65% went remote-only.

This year, only 10% of CEOs work in the office. 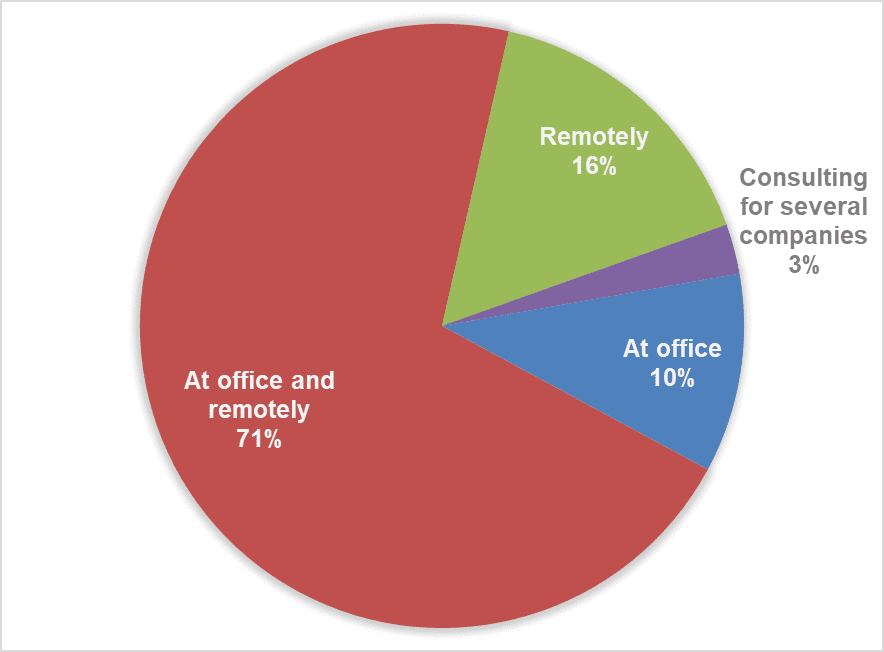 The analysis data is based on 75 questionnaires filled by CEOs, General Managers, Country Managers, and founders working as CEOs for their businesses.

Most respondents were males aged 31–39 working primarily for product companies (62%) founded in Ukraine with revenue ranging from below $1 million to $7 million (only 15 CEOs worked in the companies with revenue upwards of $10 million).

We hope this information was helpful and appreciate any feedback you might have.

We also thank Royallex, as represented by Vitaliy Luzhentsov, for helping us process the data.

03.06.2021
Common articles
Why you do not need an outstanding CEO, CTO, CFO and other CxO
You need good and competent management to make your company grow and develop. But, you don’t have to entice Satya Nadella from Microsoft. When you hire a CEO, CTO or a ma..

2984
“Our managers spend around 30% of their time searching for talent”: an interview with Maxim Shtepa, CEO of SocialTech
From the experience of Indigo , one of the keys to effective recruitment is the dialogue between parties. That is why we have decided to publish a series of interviews ..

2906
Why does your business need a recruiter?
This article may be of use to owners and directors familiar with Ukrainian IT realities who want to improve their recruiting and also to those foreign companies who are i..

2616
Overview of the salary for C-level in the Ukrainian IT market in 2019
CEO Ekaterina Osadchuk and the Indigo Tech Recruiters team conducted the second annual review of C-level salaries in IT. We share the results

16261
C-Level Executive Salaries in Ukrainian IT Sector in 2021: Overview
CEO Ekaterina Osadchuk and the Indigo Tech Recruiters team gave the third annual overview of how much C-level executives make in the IT sector. We share our results with ..

7707
Thrifty Recruiting: Soul or Flesh?
About the author: Katya Osadchuk. CEO of Indigo. Economist, professional psychologist, and a savvy HR with over 10 years of experience, 6 of them as HR Director. She know..

2867
Does HR Help a Company Earn Money or Just Spends It?
Katya Osadchuk— CEO, IndigoIT recruiting agency, economist, professional psychologist, and HR with over 10 years of experience, 6 of them as HR Director. This article is ..

4237
WHY DO US COMPANIES OPEN OFFICES IN UKRAINE
More and more of the world’s best known companies are choosing to open R&D centers in Ukraine. Household names such as — EPAM, Luxoft, Ciklum, Intetics, TEAM Internationa..

3258
Overview of Product Roles salaries in Ukrainian IT companies
CEO Ekaterina Osadchuk and the Indigo Tech Recruiters team conducted the second annual review of salaries for C-level in IT. We remind you that every year we carry out a ..

2680
COO – the role and salary in the realities of Ukrainian IT
CEO Ekaterina Osadchuk and the INDIGO Tech Recruiters team conducted the second annual review of C-level salaries in IT. Recently, we published a review of the sala..

3242
Review of CTOs’ salaries in the Ukrainian IT industry
The CTO, (Chief Technology Officer), is responsible for the strategic and technical development of the company, developing and optimizing products, as well as the product..

2571
The Role and Salary of COOs at Ukrainian IT Companies
In reality, the responsibilities of the COO are determined by the number of ‘holes’ and and ‘fires’ at their company