How much did CEOs get in the Ukrainian IT market in 2022?

Where is the bigger reward: in product or outsourcing companies? Has the salary of women and men become equal? Answers to these and other questions in our article. 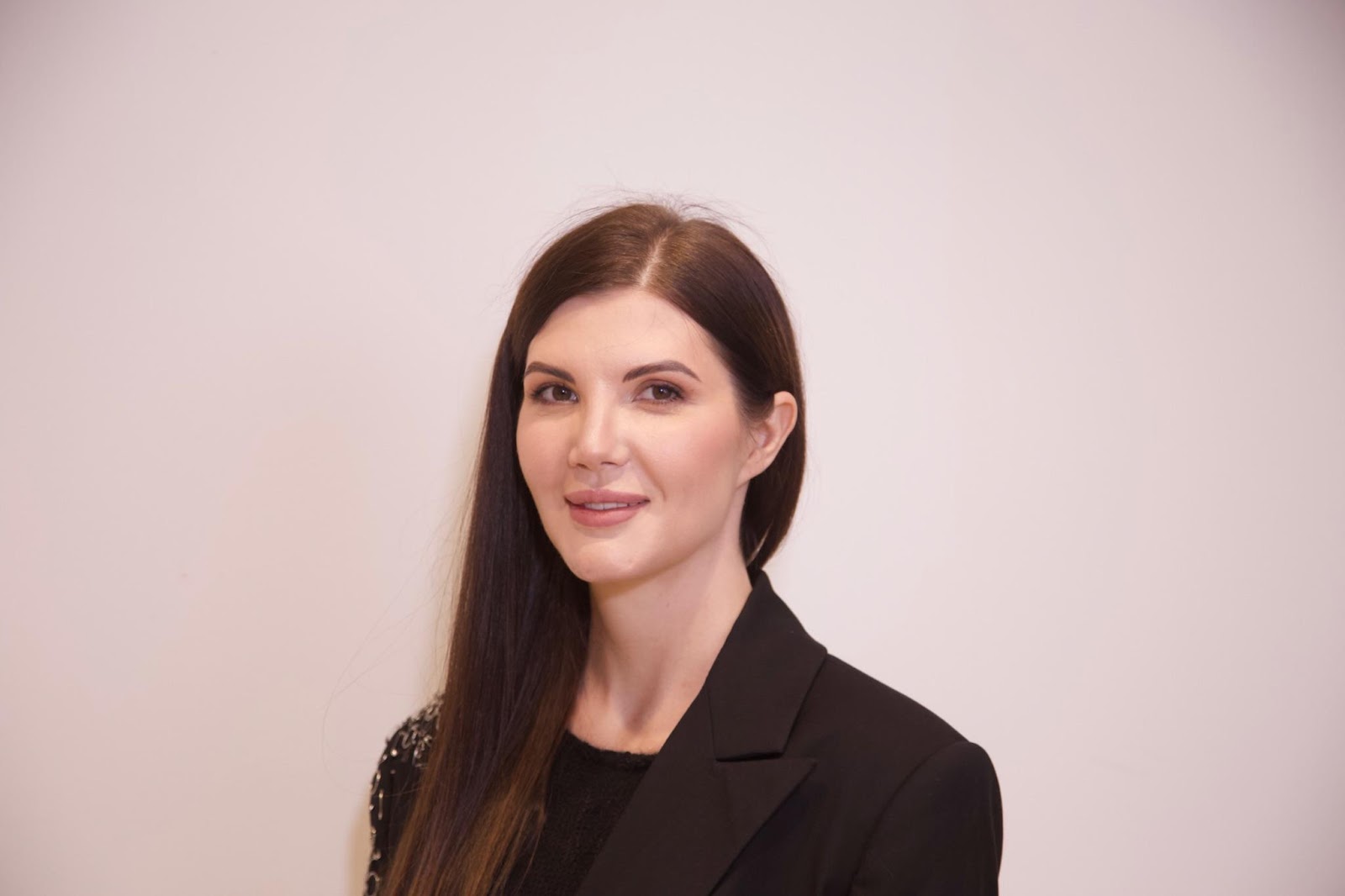 This time we’ll focus on specific positions from that review.

We thank Fint8, represented by Anton Shulyk and Andrii Tertyshnyk, for their help with data processing.

We received 52 questionnaires filled by founders who hold the CEO roles in their businesses, as well as by hired CEOs, Country Managers, and General Managers. Most data is from top managers who work for companies founded in Ukraine. Among the respondents, 42 were male and 10 were female.

As we can see, women hold significantly fewer top positions in the company structure than men.

The difference is 33% in median earnings and 31% in mean earnings, with women traditionally (and unfairly) making less. 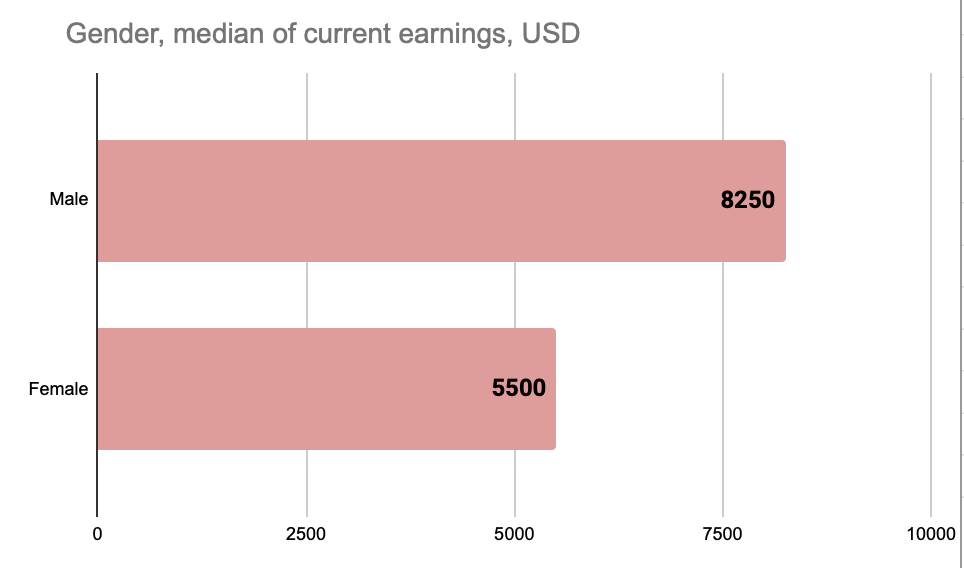 CEOs who also are founders or co-founders at their companies have the highest median salary of $10,500 and their mean salary of $11,923, excluding dividends.

Fig. 3. Salary fork by positions. Dividends are not included in the numbers for founders in CEO positions.

When deciding on the amount of salary, it is important to consider not only general earnings data but also the person’s experience, company size, the number of employees, etc. So let’s look at these things next.

Please note that we excluded the entries on which we got four or fewer responses since it is not enough to stay objective and form a fork.

For example, if only four CEOs tell us they work in companies employing more than 500 people, we do not include it for the lack of representativity and only take the data based on five or more responses into account.

Interestingly, heads of outsourcing companies have the highest salaries, even though there were only seven questionnaires from them.

CEOs of product companies reported somewhat lower earnings than in 2021.

Most IT CEOs (among our respondents) are between 30 and 39 years old.

The salary fork of CEOs aged 40–44 is the lowest, even compared to their younger colleagues between 25 and 34. On the other hand, there was not much data on this age group—only nine questionnaires.

The age of the company where the CEO works matters as well.  In those with over 10 years of market presence, CEOs make more than their colleagues from younger companies in terms of both the median salary and salary fork. Their median salary amounts to $9,000 and their mean salary to $10,724.

Quite surprisingly, CEOs of companies active for 1–3 years also enjoy decent earnings, even higher than in older businesses (3–5 years). But that is a common thing, which we can see in our overviews every year. Young companies without an established salary system often pay whatever amount they’re asked because hiring isn’t always easy for start-ups (a matter of stability). In addition, they don’t always check the market, being at a stage when fast growth matters more than cost-saving.

Company leaders with over 10 years of experience in top positions have 52% higher median salaries and 47% higher mean salaries.

Fig. 7. Dependency of earnings on the years of experience as a top manager.

The mean figure demonstrates that CEOs at companies employing over 200 people have the highest salaries of $13,000.

Fig. 8. Dependency of earnings on the number of company employees.

Unfortunately, we didn’t have enough data on CEOs’ earnings in the companies with more than $10 million turnover. But we can see that CEOs in those with over $7 million turnover have a mean salary of $11,536. Their salary at the top of the fork (90th percentile) is also higher at $21,050.

Interestingly, mean salaries are often higher for CEOs at companies with turnover below $1 million.

What is the strongest motivation for CEOs?

Decision-making freedom was in the first place (60%), the company’s mission and goal took second (56%), professional growth took third (54%), and the ability to balance work and life was in fourth place (48%).

Like in 2021, most company CEOs are demotivated by the lack of work-life balance. Apparently, it’s a specific thing that top management has to deal with—even after shutting down their laptop, they keep mulling over their tasks or staying in touch with the team outside of working hours. 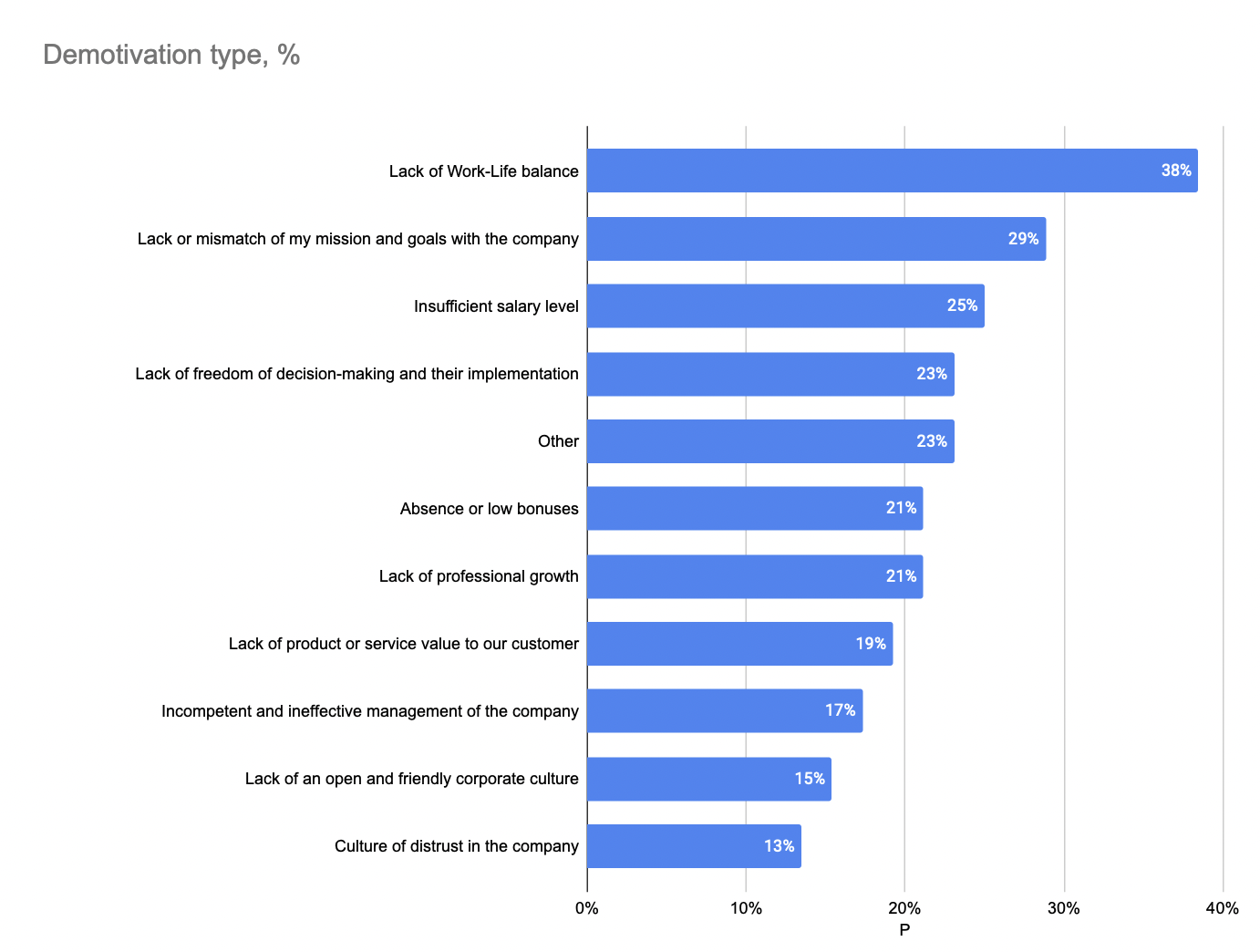 A compensation package for CEOs at IT companies looks like this.

Most CEOs have a flexible schedule option, but as we can see from the picture above, it doesn’t compensate for the lack of work-life balance.

Share-based compensation was in second place (35%). And third place was shared between medical insurance and payment for additional education (27%). 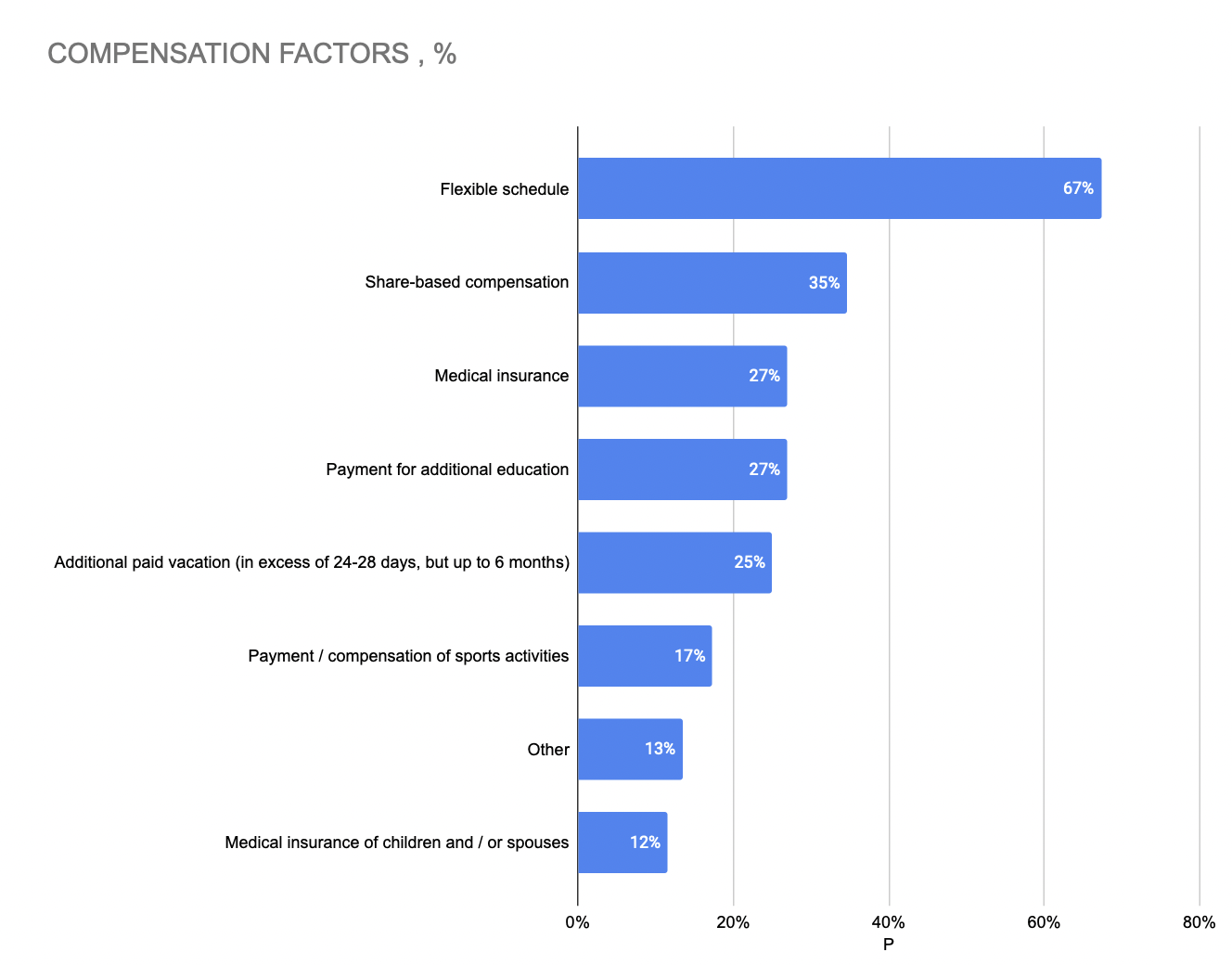 In 2022, we can see that even the company management work only remotely in 30.8% of cases. Unfortunately, that is not only their choice but also due to the outbreak of the war. 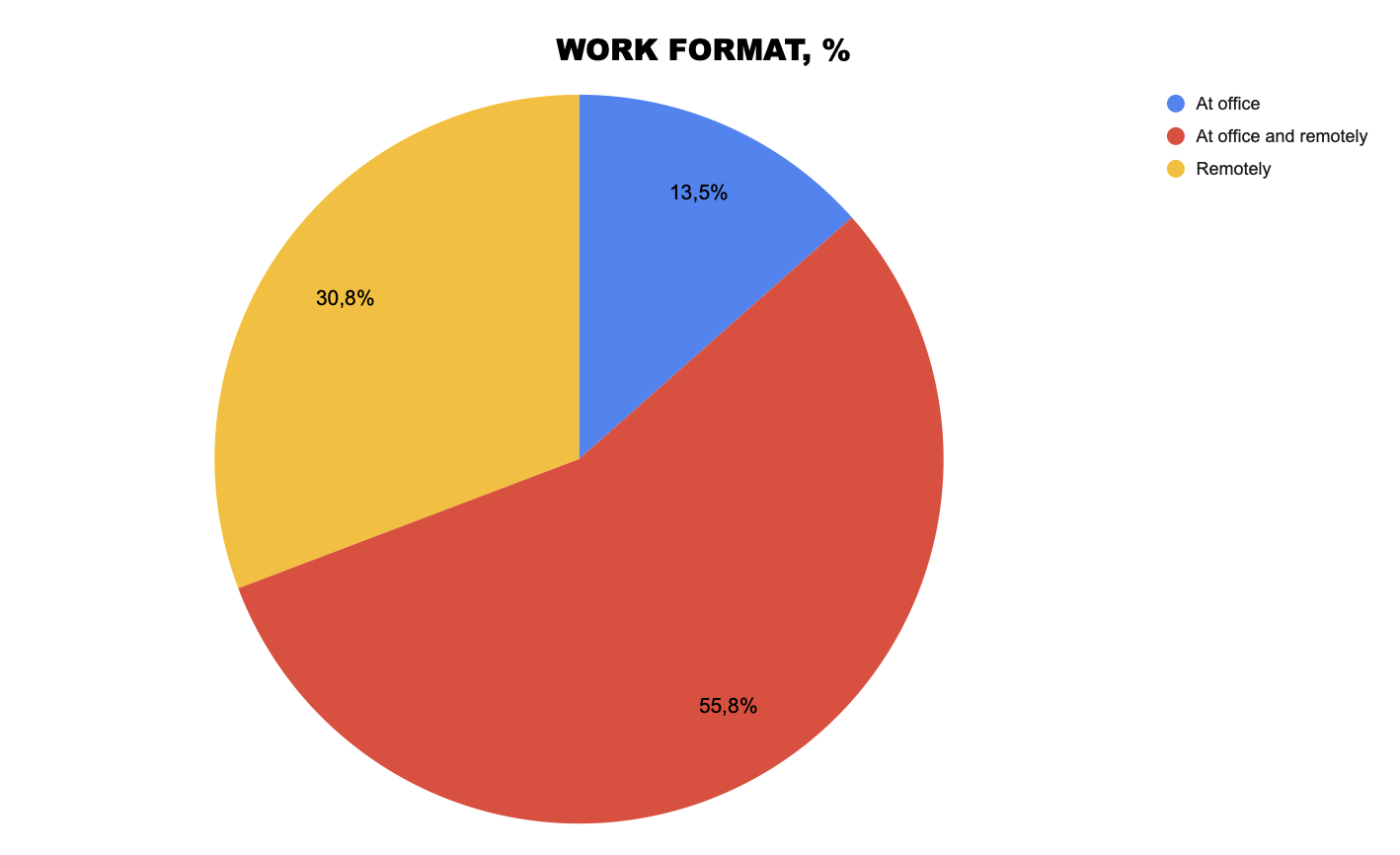 The results of this analysis are based on 52 questionnaires from CEOs, General Managers, Country Managers, and founders who hold CEO roles at their companies.

Most respondents are men aged 31—39 working predominantly for the product (35%) and outsourcing companies (46%) with turnover from below $1 million to $7 million, founded in Ukraine.

We hope that you found this information useful and will be happy to receive your feedback.

12.01.2023
Common articles
Why you do not need an outstanding CEO, CTO, CFO and other CxO
You need good and competent management to make your company grow and develop. But, you don’t have to entice Satya Nadella from Microsoft. When you hire a CEO, CTO or a ma..

16636
COMPANY IS ALWAYS MADE BY TALENTED PEOPLE. DIALOG WITH LESYA ARNOLD
We dreamt for a long time to have an interview with Lesya

9751
Thrifty Recruiting: Soul or Flesh?
About the author: Katya Osadchuk. CEO of Indigo. Economist, professional psychologist, and a savvy HR with over 10 years of experience, 6 of them as HR Director. She know..

4519
WHY DO US COMPANIES OPEN OFFICES IN UKRAINE
More and more of the world’s best known companies are choosing to open R&D centers in Ukraine. Household names such as — EPAM, Luxoft, Ciklum, Intetics, TEAM Internationa..

3665
Overview of Product Roles salaries in Ukrainian IT companies
CEO Ekaterina Osadchuk and the Indigo Tech Recruiters team conducted the second annual review of salaries for C-level in IT. We remind you that every year we carry out a ..

2890
COO – the role and salary in the realities of Ukrainian IT
CEO Ekaterina Osadchuk and the INDIGO Tech Recruiters team conducted the second annual review of C-level salaries in IT. Recently, we published a review of the sala..